I am mastering  my Majacraft Aura Wheel slowly but surly. I brought two plaits from Kathy's Fibres and two bags of silk in the colour way called ocean. I split the plaits into 8 sections then spun the merino into a fine single . the slik was then treated the same and spun into as fine a single as I could. I then plied the two singles together but run out of sink half way through. I could have brought some more silk but just plied the the rest of the merino together with itself.I had 200 cm's x 156 rounds =  312 meters of  silk wool mix and the same of merino merino mix.
. 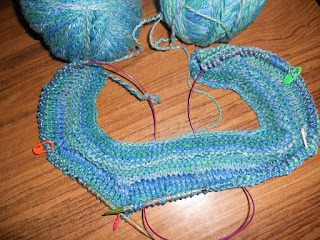 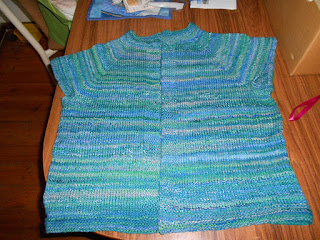 I found this top down vest pattern on Ravelry and because I had no idea really how far my yarn would knit I thought top down would be best . I joined at the underarm and completed to cuff/ band then cast off the sleeves. I then knitted the body as far as I was able. the length is OK but I would like it just a bit longer but its very wearable.love how the colour has blended and its so soft and cuddly
- February 20, 2013 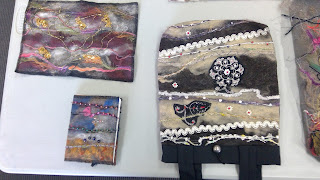